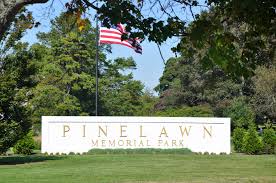 Pinelawn Cemetery is a stock that was featured in the How to Profit from the Coronavirus Recession. Since then, the stock is up 50 percent. The following is the text from the book.

If you want a steady yearly income, Pinelawn Cemetery might be the perfect stock for you because it pays a dividend yield of about 9 percent per year. Technically, Pinelawn is not a company. Think of it as a bond, contract, or royalty trust. Here is how it works.

More than 100 years ago, William H. Locke, Jr., raised capital from individuals in order to build a huge cemetery in Farmingdale, NY. He did that because he saw that cemeteries in New York and New Jersey were running out of space. He bought 2,300 acres, which is now the largest burial ground in the state. Pinelawn thinks of itself as a memorial park, not a cemetery.

The people that gave him money were promised that they would receive 50 percent of the plot sale proceeds as dividends until the cemetery was full. Obviously, all those people are already dead, but those share certificates kept being passed on from one generation to another and now they trade on the OTC market.

So, if there are X number of plots sold per year at a particular price, 50 percent of the sale proceeds goes to pay the current shareholders. It usually comes out to about a dividend yield of 9 percent. Obviously, it could be more or less from year to year, but usually deaths are somewhat predictable.

The coronavirus makes Pinelawn even more interesting especially when so many people are catching it in crowded New York. No wonder the stock price didn’t even budge during the coronavirus sell-off.

The most obvious objection to buying the stock is the elimination of the dividend when the cemetery is full. Don’t worry. There is so much land still available that even if you are in your 20s, you will die before everything is sold out.

Pinelawn is the perfect dividend-paying stock that will always be there. As Benjamin Franklin was quoted saying, “In this world nothing can be said to be certain, except death and taxes.” You will get your dividend.

There are a total of 127,850 shares. At $300 per share, the market capitalization is $38.3 million. When trying to buy shares, be patient because it only trades a few shares per day.