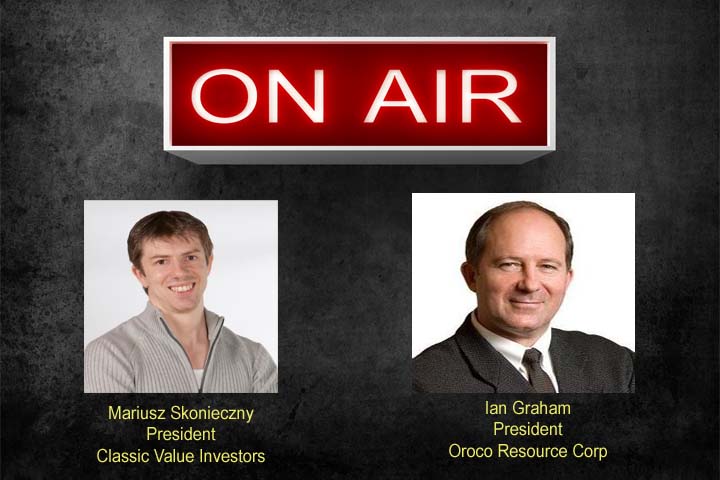 If you followed my blog for the last three years, you know that I wrote about Oroco many times. Oroco is a 100-bagger from where I started buying it. Recently that 100-bagger has been interrupted by the virus. But this does not mean that the stock price does not get to the final destination. It is likely going to take a bit longer, which is ok. The following is an interview with Ian Graham. Oroco was also featured on my new book, How to Profit from the Coronavirus Recession.

Oroco Resource Corp. has recently added Ian Graham to its management team, as President and Director.

Ian is a geologist with three decades experience, most of that with the mining majors Rio Tinto and Anglo American. At Rio Tinto, Ian was Chief Geologist with the Project Generation Group, responsible for assessing projects with potential for economic development. Ian knows the criteria and thresholds a major applies when assessing projects, and his decision to join Oroco speaks volumes about Santo Tomás’ qualities.

I have had an opportunity to speak with Ian about his mandate at Oroco and how he expects to execute it. In the process I learned a great deal about the project and reinforced my long-held positive assessment the company.

MS: Thank you Ian for agreeing to this interview. I’ve followed Oroco for years and made the decision to invest based on my understanding that the legal title dispute would be resolved in Oroco’s favour and following that the resource, metallurgical test results, mine planning, etc. that went into the 1994 Bateman report, establishing Santo Tomás as a very large, viable project, of the type that would attract the interest of a major, has a high probability of repeatability. Can you comment on that?

IG: Let me start by thanking you for your support of the company, you have clearly done your homework and made some good calls in pursuit of your investments.

The historical work at Santo Tomás has pedigree. The operators and their external consultants at each of the historical stages of advancement have been credible, reliable companies and consultancies whose standards we can reasonably trust. Following the first drill program, each successive exploration program conducted check assay tests in which available drill samples were re-assayed, in each event confirming the results of prior programs. This was done again in 2006 by Paul McGuigan, now Oroco’s Chief Consulting Geologist. In all, three check assay programs have been conducted and each provided confirmation and validation of previous work.

Similarly, metallurgical testing was conducted in three successive programs, each with comparable positive results. Traditional grinding and flotation were found to yield good recoveries, with gold, silver and molybdenum all reporting to the copper concentrate, also at reasonable recovery levels – and those test concentrates did not feature deleterious element levels that might impair the value of the concentrate reported.  It appears we can expect that a “clean” saleable concentrate can be produced at Santo Tomás.

Given this history, I agree with your assessment. I expect that the historical findings will be verified.

MS: And beyond that? Exploration upside appears a probability as well, doesn’t it? It seems that there is a great deal of potential, even likelihood of considerable expansion of the deposit. Bateman Engineering conclude in 1994 that the “resource is likely to increase in grade and tonnage with additional exploration” and just by looking at the maps and sections that looks obvious. Do you agree?

IG: Prior drill programs tested just the upper 200 to 300 meters of a mineralized structure where the total dip extent isn’t yet known – with many of the historic holes terminating in higher grade intervals. The outcropping, tabular, dipping host to mineralization will be drilled by Oroco to test the down-dip extension of the mineralization, and we fully expect there is significant potential for expansion to depth. The dip-slope of the mineralized host is roughly concordant with the western slopes of the mountain ridge that hosts the North and South Zone deposits, so we can reasonably anticipate that the future potential open pit mine plans in these zones will feature very, very attractive open pit mine geometries that will offer low strip ratios.

In addition to the significant dip-extension potential, the full strike extension to the NNE and southward of the core area are as yet unconstrained. In addition, some of the core North Zone and much of the South Zone that were drill-tested historically were such that the number and spacing of those historical holes allowed only an for an ‘inferred resource’ to have been calculated. Continuity of mineralization is a hallmark of copper porphyry deposits and if that holds true at Santo Tomás then there are significant quantities of material that might in future be shown to comprise measured and indicated resources. But I would caution your readers at this point –  the past work is strictly historical and is being used by Oroco to inform geological modeling and drill planning. The past estimates do not conform to Canadian National Instrument 43-101 Standards of Disclosure for Mineral Projects owing to the length of time since the estimates were made and the lack of current check assays of the drill samples. Your readers must be advised to not rely on or treat the historical work as a current estimate of the mineral resources or mineral reserves.

The potential extension of mineralization toward the NNE comprises a zone known as Brasiles – it is characterized by significant structural evidence for mineralization pathways and surface evidence of iron and copper oxides, and evidence of three historical drill hole collars.

So, yes, I agree, there is much to look forward to at Santo Tomás aside from just the potential to verify the already substantial historical resource.

MS: One of the exploration tools you’ll use at Santo Tomás is a Three-Dimensional Induced Polarization Survey. This sounds like an exciting technology with an ability to look many hundreds of meters underground and “see” mineralization. Can you tell me about this technology, and what we should expect when it’s applied at Santo Tomás.

Sure, IP systems are used to detect the variation in certain electrical properties in the subsurface rocks underlying a survey area. IP systems initially map resistivity – measuring where rocks with greater or lesser resistance to the flow of electric current lie, and then map IP by measuring the distribution of rock units with greater or lesser capacity to hold an electric charge by recording the rate at which the charge introduced for the resistivity measurement dissipates. This active capacitance of the subsurface, when considered with the resistivity, helps define zones where clays and other chargeable minerals are located within the host rock, so the method can help map alteration zones, fault structures, and concentrations of such minerals as pyrite and other metal sulfides which are deposited by hydrothermal fluids to form many copper, gold and silver deposits. These sulfide minerals can have a large IP signature, especially when disseminated as smaller grains in a rock matrix, so IP is commonly very useful when exploring and delineating sulfide copper deposits like Santo Tomás.

Oroco has contracted a team and system that uses a wirelessly connected receiver electrode detector array, each electrode having its own GPS locator, where the array is distributed over a large area each time part of the survey area is electrically charged. The scale of the array, and the high energy of the induction system improves the depth of detection and the suitability of the recorded data for 3D mathematical modeling of the subsurface units. The resulting 3D model is what we expect will help us ‘see’ where mineralization and other important subsurface features are likely located.

MS: How has your career prepared you for the role of President of Oroco and advancing the Santo Tomás project?

I guess my resource roles at projects which have become mines – Diavik for diamonds, Eagle for nickel, and Milestone for potash have all provided context for advancing compelling projects – and for working with great teams to navigate the course to development. Of course it’s those projects that don’t go all the way that sometimes offer the ‘hard knocks’ education – the Bunder diamond project in India has strong potential but we didn’t navigate all the rapids successfully whilst I was at the helm; and at Western Potash I learned how challenging it is for junior companies to finance mega-project construction. My time at Resolution Copper is perhaps technically of most relevance to our Santo Tomás project, not just because it is a porphyry copper deposit but because my role there was directed at water strategy, legal strategy, US federal and Arizona government liaison, securing relationships with the town community, and issues related to sacred sites and desert species. At Eagle we built a coalition that steered through state legislation that now allows for sulfide metal mining in Michigan, so whilst I am technical by training I know and believe that social license and risk management provide the security enabling project purchase or development investments by mineral producers.

MS: Your appointment as President signals to me that Oroco is preparing for a focus on the technical program at Santo Tomás. Can you detail for me how that technical program will unfold and what milestones and timeframes we can expect.

Definitely, though I might have been a little more prescriptive with respect to timeframes prior to the COVID pandemic. Still, subject to the normalization of travel restrictions, we will commence work with the IP survey, and follow with drill mobilization as the IP completes and initial permits are issued.

I should point out that our Chief Consulting Geologist, Paul McGuigan, has a long history at Santo Tomás.

I would expect the initial phases of drilling – some 25,000 to 28,000m, to scale up subject to permits and financing, targeting 8 months to complete once the drilling commences, and then an uninterrupted and seamless transition to subsequent drilling phases. We intend to start environmental baseline and other project studies once we verify the historically identified core of contiguous mineralization at the Santo Tomás North zone.