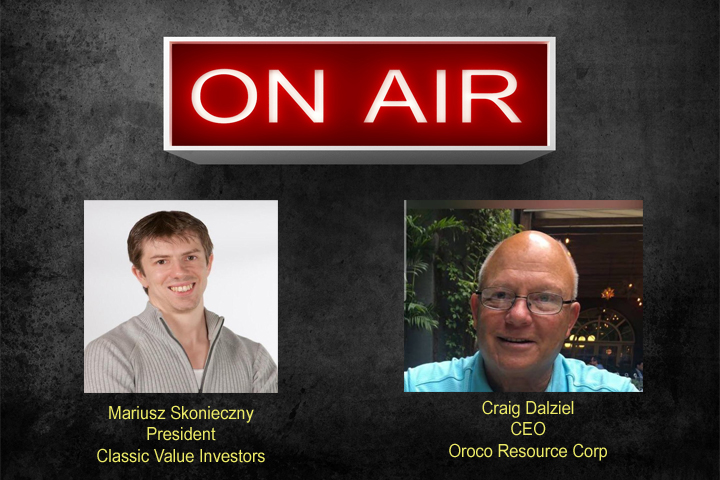 Mariusz Skonieczny: How has a small company like Oroco been able to become involved in a world-class project like Santo Tomas?

Craig Dalziel: The vendor of Oroco’s Cerro Prieto project in Sonora State approached Oroco in 2009 in an attempt to secure Oroco’s assistance in recovering his ownership of Santo Tomas, which interest had been compromised by a title dispute.  At the time, the title issues discouraged the Oroco Board of Directors from taking on the recovery process.  As a result, I organized a group of private investors, through ATM Mining Corp. and later Altamura Copper Corp., who committed the necessary resources to the recovery process.  Thereafter, Oroco monitored the progress of the investor group until mid-2015 when it was determined that sufficient progress in the recovery process had been made so as to warrant the formal participation of Oroco in the project.  At that point Oroco was offered and accepted an investment structure which has allowed it to progressively increase its stake in the project without excessive burden.

An important aspect of the resulting land assembly was the degree to which the various components were acquired on a basis whereby the great majority of the purchase consideration is payable upon the ultimate sale of the project.  Various elements of the transaction, including cash contingency arrangements and third-party equity agreements are either staged or limited to dispositions at the end of the project, with relatively little consideration payable along the way.

MS: Oroco has announced that it is “negotiating to acquire the remaining common shares of Altamura that the Company does not own” and with that an interest in the Santo Tomas concessions, and that “Altamura has agreed that, upon the resolution of an existing legal dispute” … that this can proceed.  Now that the acquisition has been announced, does this mean that there has been a change in the status of the legal dispute?

CD: While the ownership of the Santo Tomas core is still formally in dispute, the recovery process has become more predictable and more certain, and therefore the project became more suitable as an acquisition target for Oroco.  In addition, it has been necessary throughout the process to maintain as much secrecy in regard to the recovery process as was practically possible.  The legal tactics necessary to maintaining advantage throughout the recovery process required as much.  This has been a fundamental restraint to the progress of Oroco’s acquisition plans.  However, Oroco is now satisfied that the pathway to registration has been properly identified, Mexican law clearly supports this assumption, and the fraudulent threat to Altamura’s rights cannot be effected.  Practically speaking, registration is now a matter of time rather than a question of outcome.

MS: Until recently the effort to clean up and consolidate ownership of all the properties was privately funded.  What are the advantages to those private parties in vending their interest to Oroco?

CD: The primary advantage to those parties is that by vending their interests to Oroco, it provides a stronger basis upon which the project can be expanded, funded and developed.  In addition, several of the private investors have had a lengthy involvement with the management group of Oroco which, given the potential scope of the project, avoids a significant conflict of interest.  Furthermore, it fulfills the objective of those investors in that Oroco was always intended to have the first opportunity to take the project forward.

MS: The feedback that I am getting is that the market is taking a wait and see approach; it is waiting to see if and when Oroco can in fact resolve all the issues regarding ownership of the core Santo Tomas properties and for the first time in decades consolidate ownership of this potentially world-class project.  To date Oroco has acquired properties surrounding the core concessions and recently announced the acquisition of historical data generated over two decades of active exploration at Santo Tomas.  How would you characterize the value of the assets already acquired by Oroco?

CD: When the Santo Tomas-related investment was initiated by Oroco, an ancillary plan was developed which focused on the acquisition of certain surrounding properties in conjunction with the continued investment into the entity which was directing the recovery process for the core properties.  From a valuation perspective, Oroco management is very comfortable that the assets which have been accumulated to date fully support the value of the Company, as currently represented by its share price.  The additional assets controlled by Altamura Copper Corp. should be moderately factored until its acquisition is completed.

MS: The Santo Tomas project consists of two groups of properties, a core group that is the subject of a legal dispute and surrounding properties, which Oroco has been acquiring during the past year. The core property is where most of the studies have been done while surrounding properties offer a lot of potential upside. How important is the consolidation of ownership of these properties and what ownership interest is Oroco hoping for among the various properties?

CD: An appropriate development plan for Santo Tomas must allow for several occurrences, including the expansion of the identified resource, the placement of production facilities, and the location of tailings disposal areas.  This is being accomplished by way of the acquisition of certain key peripheral properties which satisfy those criteria.  Our ownership objective with respect to the peripheral properties is a minimum of 80 percent.

MS: What exploration and development plans does the company have and how would these enhance the value of the company?

CD: The exploration priority at Santo Tomas is to increase the amount of commercially viable copper resources, with the initial focus on the infill potential which is expected to significantly increase the size of the known resource.  Thereafter, we will test the extensions of the deposit to the north, south, and west, as well as to depth, which remains open in many locations within the established pit limits.  One of the considerable advantages that the project holds is the fact that so much value is already known to exist, which therefore allows for a more aggressive exploration strategy.  How this activity will enhance the value of the company is two-fold, with the first being the obvious value associated with an increase in the size and quality of the resource.  Secondly, the nature of our partnership agreements is such that continued exploration success will require expenditures which will substantially increase our overall ownership position in the project at a rate which we believe should exceed the rate of dilution encountered in raising the funds for the project.

MS: If your plan is to ultimately sell the project to a major, what makes Santo Tomas a project of interest to those companies? What are the qualities of Santo Tomas that would make it attractive to producers?

CD: Santo Tomas has great potential to be a tier one asset producing a tier one commodity.  Porphyry copper deposits that can be economically exploited – and in 1994 Bateman Engineering produced a “positive” Prefeasibility Study of Santo Tomas, demonstrating its economic viability – can host mining operations of enormous size, generating annual revenue of many hundreds of millions, and in some cases billions of dollars, over many decades. These long-life assets are capable of profitability over many cycles in commodity prices and make up the premier assets of the world’s major mining companies, ranking them among the world’s most valuable deposit types.

Santo Tomas hosts a technically undefined (historic, pre-NI 43-101) resource, being an approximate 1 billion tonne copper porphyry deposit containing over 7 billion pounds of copper, with superior access to the infrastructure necessary to support a large mine, and located in a top mining jurisdiction.  Furthermore, as reported in the considerable body of historical work, including the 1994 (updated in 2003) Prefeasibility Study by Bateman Engineering, a leading mining engineering firm at the time, the Santo Tomas deposit has favourable metallurgical properties, favourable deposit characteristics, i.e. size and strip ratios, and overall grade which compares favourably to current industry standards.

During the past decade exploration for new copper production opportunities has generated few new discoveries. Favourable industry conditions which support the viability of Santo Tomas are: historically low levels of exploration success, declining grades and production at the world’s large, aging copper mines, as well as relentlessly rising levels of copper consumption and forecasts of even greater levels of copper usage, driven by technological change, population growth and rising wealth.  Historical exploration and development at Santo Tomas was competent, thorough, and demonstrates that it has the likelihood of hosting a major copper mine.  As attested to by the robust levels of industry mergers and acquisitions during the past decade, majors are scouring the earth for such opportunities.

MS: Assuming the resolution of the issues related to the core properties and the consolidation of all properties, the market will start to set a value for the project.  What valuation metrics should be considered?

CD: Every investor should have his own valuation criteria.  For the reasons that the project’s title issues make its development timelines uncertain, we prefer to avoid setting valuation expectations at this time.  However, projects such as Santo Tomas are usually valued using fundamental criteria such as the considered value of a pound of copper in the ground, or a value based on the project N.P.V as calculated in an advanced engineering study. Over the past decade a significant number of the major, known undeveloped porphyry copper projects have been acquired by major mining companies and data from these transactions provide useful benchmarks. In May of this year, RBC Capital Markets published research, titled “The world needs more copper, a look at which projects can deliver it,” which analyzed this data and provided metrics for the valuation of major porphyry deposits, in the context of a projected need for copper production to rise by 25% above today’s level, or an additional 5 million tonnes annually by 2028. Using valuation metrics based on in-situ, or contained copper, RBC states “Junior copper explorers have received renewed attention and the base metals juniors we track are now trading at $0.03/lb (EV/lb CuEq M&I+I) which remains below the average transaction price since 2010 of $0.07/lb.”

MS: Is there anything else that you would like to add that we did not cover?

CD: I would like to comment on the reasons for our confidence that the Santo Tomas project will be well received, both locally and within the region.  Firstly, our partnership arrangements with local interests will be of considerable benefit in generating the cooperation of the local community as well as in dealing with local government and mining regulators.

Secondly, Santo Tomas is located in the northern area of Sinaloa State, adjacent to Sonora and Chihuahua States, three of Mexico’s most important mining centres, and is surrounded by internationally-owned major mines, including Palmerejo (Coeur Mining Inc.), Piedras Verdes (Invecture Group), El Sauzal (Goldcorp)  and Pinos Altos (Agnico Eagle).  As a result, we have access to an experienced local labour pool.  Furthermore, with superior infrastructure available to support the project, the commercial synergies are there to be utilized favourably.  We could not be more pleased with the project’s setting.