His Last Dance Was My First, Literally 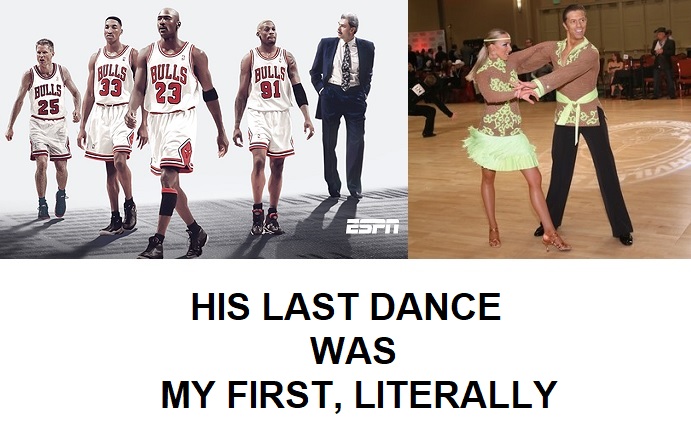 You see, right now I am known among my small circles as a dancer and investor, but when I lived in Poland, I was an athlete. Actually, it is an understatement. Sport was on my mind 24 hours per day, 7 days a week, and 365 days per year. Even when I was sleeping I was dreaming of sports. At that time, dance was for girls.

I was born in 1980. I was a very active kid. Probably when I was 2 years old, I was given a soccer ball. By the age of 6, I was pretty good. I remember outplaying kids much older than me. As a result of this, I was given a nick name Maradona which was quickly shortened to Mara. The nickname came from Diego Maradona.

At that time, Maradona was the best soccer player in the world. Some believe that he was better than today’s Messi and Ronaldo.

Even though everybody called me Mara, I am not sure how many knew where the name came from but this did not matter to me. I knew and I was proud of it.

One thing that I noticed when I was playing soccer was that once I had the ball, nobody was able to catch me. For some reason, I was always faster when it came to running. I never worked at it. I was just fast. Then, one day, when I was probably 11 or 12 years old, my elementary school signed me up for a Track & Field meet in my city. This was an event where all the best kids from all the city schools competed. I was signed up for a 60 meters dash.

I didn’t have running shoes or anything like that. I ran the preliminary round and took second place. But I still made it to the final. Some girl came to me and said “You are the only person that does not have running shoes. You don’t have enough friction.” She was right especially because at that time, the track was covered with gravel or something like that. She said, “Use my shoes.” I never saw shoes like that. They had nails sticking out of them. Anyway, I put them on and they fitted fine. I ran the final and won.

From that meet, I was recruited to a special running school, School of Champions in Sports. So I ended up transferring from my elementary school to a running elementary school for my 7th and 8th grade. It was a fantastic experience and I ended up becoming a national champion in one of the events.

I could have stayed with running but something else happened during that time – Jordan and Chicago Bulls. This was between 1992 to 1995. This was when Chicago Bulls was winning their first championships and of course Barcelona 1992 and the Dream Team happened.

Because of Jordan and Chicago Bulls, everybody wanted to play basketball. Everybody wanted to have a hoop in front of their house. We played playoffs between individual streets and neighborhoods. Me being me, I always wanted to be the best so I practiced like a maniac driving my neighbors crazy. Like with soccer and running, I became pretty good in relations to my peers. No, my nickname did not change. I stayed Mara forever, at least in Poland.

While it was fun playing street ball, my dream was to play on a real basketball team. However, the problem was that there were no basketball teams at that time. The sport was just introduced. In Poland, schools were separate from clubs. If you wanted to play organized soccer, you had to sign up with a soccer club. The same would have been true for basketball, but there were no basketball clubs. The running school was different – school and Track & Field were together.

Just because there were no basketball clubs in Poland did not mean that my dream was not going to come true. In 1993, my family applied to come to the United States to join my grandmother who lived in Chicago. Yes, the same Chicago that Jordan played for. As you can see, Chicago Bulls was my team.

While we were waiting for the green cards, Jordan retired in October 1993. I was so disappointed. I missed it. How could the immigration do this to me? I didn’t even feel like coming anymore. Then, one day, I had a dream that Jordan returned to Chicago Bulls wearing a different number. I am not making this up. Seriously. This is crazy. Then, a couple of months later he did return to Bulls wearing 45 before switching back to 23.

Nobody believed me that I had such a dream but I did not care. I was coming to the United Stated. As far as I was concerned, Jordan returned at a perfect time. He returned in March 1995 and we were given green cards in 1996. I was going to meet him. I was going to watch him play. And of course, I was going to play on a real basketball team. We arrived in Chicago on June 23, 1996. I kid you not. June 23 like Jordan’s jersey.

After arriving, I learned that in the United States, kids played in schools, not clubs. So I could not wait for the school to start. I was going to be a sophomore. When the school started, I immediately went to find out where to sign up for the basketball team. I was told I had to wait until winter because basketball for boys was a winter sport. Damn it. I came all the way from Poland to the United States to play my favorite sport and I have to wait another three months. I was pissed. But there was nothing I could do.

Wait a minute. There was one thing I could do. How about chasing Jordan? My cousin, who was already in the United States for three years, found out where Jordan lived. This must have been November 1, 1996. I don’t remember but  I just looked up the first Chicago Bulls game of the 1996/1997 season. He drove me in front of Jordan’s house. Yes, the one in Deerfield with number 23 on the front gate.

We were sitting on the hood of my cousin’s red Jeep talking and admiring the house for about 20 minutes and all of a sudden, the gate started opening and a black Blazer began approaching us. My cousin said, “Is this him?” My heart started pounding. I could not see from far away because the windows were tinted. But eventually, I was able to see Jordan’s bold head silhouette. “Yes, this is Jordan.”

I don’t know if I was hoping that he would stop and say hello, but he just kept on driving without even acknowledging us. To be fair to him, I am sure he was dealing with this kind of thing all the time. And we were not directly in front of the gate at that time but a little bit to the side so it was easy for him to ignore us. I mean, I am sure he saw us but it was easy to just keep on driving. What else was he going to do? Stop and say “Do you want to join me at the United Center for our first game?”

Anyway, he just kept on driving. My cousin looked at me and said, “That’s it? What do you want to do?” I said, “Let’s chase him.” And we did. We got into the red Jeep and started chasing him. It took us a bit but we finally caught up to him on the highway. My cousin pulled up right next to him and I started waving and smiling. Again, Jordan completely ignored us. He didn’t even make eye contact. After about 10 seconds of trying to get his attention, we gave up and went home.

Even though I was disappointed that Jordan ignored me, I was fired up for the winter basketball season at my high school. I signed up for the tryouts and I made the team. A lot of my new friends were surprised. Apparently, it was something special to make the team. Well, I didn’t really think about it. I just expected to make it. I came all the way from Poland to play so how could they reject me?

I had no idea I was about to get completely devastated. Yes, I made the team but the team already had the starting five and second team. They already played with each other in grade school and freshman year of high school. Here I was this kid from Poland who barely spoke any English and did not have any experience playing games. The only experience when it came to basketball was playing outside 2 on 2 or 1 on 1. I was very confident that I could beat most of these kids 1 on 1 or 2 on 2 but 5 on 5 was a completely different experience. I was lost. Plus, I felt like I was never even given a chance. Every practice was just watching the other kids play and when it came to the actual games I never played. I seat on the bench all the way at the end. One time and only one time, the coach let me play for 20 seconds. So I came all the way from Poland with a dream of playing on the basketball team and I got to play for 20 seconds during the entire season.

I was devastated. I hated basketball. But I got one satisfaction out of the entire experience – when the coach made us do running drills, I destroyed the other kids. I was a running champion and I wasn’t going to let some basketball players come even close to me when it came to running. In fact, I beat them so bad that my basketball coach invited a track coach to our practice just to watch me run.

Again, I was about to get recruited to the track team. I thought to myself, I didn’t come all the way to the US to do more running. I already did that. I was tired of running. I didn’t want to do it anymore. But they convinced me and I did do it for one semester and I was done. I was completely done with sports. I hated basketball, I was sick of running, and I could not care less about soccer.

I was so sick of sports that I didn’t even watch Jordan’s last dance which was the 1997-1998 season. I had no desire to watch basketball. The hate and devastation was the reason why I started dancing. So when Jordan was performing his last dance, I was starting my first, literally.